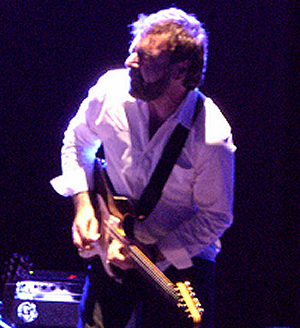 Journeyman Guitarist, Musician, Donald Dean Maracle holds a deep appreciation for the time and space for where he grew up, and for all the aspiring musicians he came to know and learn from.

A native of Rochester NY, Don was exposed to music at an early age. In his teens the guitar became the instrument of choice. While listening to everything from the Byrds to the Beatles, Cream, Hendrix, he played with as many as he could in the musically fertile environment of the Upstate NY area.

When turning 16 years old, Don found his way into being part of his first “good” band named “Joshua,” which was the opportunity to learn from mature seasoned players. The band performed regularly and opened for major artists to include Bob Seger, BB King, The J Geils Band, Buddy Guy, Freddie King and Blue Oyster Cult, Jesse Colin Young, Cactus and many others.

Don attended The Eastman School Of Music where he studied with Gene Bertoncinni, and spent a summer with Steve Brown and John Scofield at Ithaca College. At that time Don was a member of the band “Duke Jupiter,” that was soon to be signed by Mercury Records. The band recorded and released “Sweet Cheeks,” Taste The Night” and “Band In Blue.” Over the period of 3 releases the band toured and played noted US music venues and as an opener for headlining artists to include Sea Leavell, Roy Buchanon, REO Speedwagon, Foreigner, ZZ Top, and many more. When at home the band was on regular rotation with “The Neville Bros,” “Steps Ahead,” and “Orleans” at the infamous venue, “The Red Creek Inn.”

Over the years Don has developed a soulful melodic eclectic style and signature tone and lives for the magic that is found in creating “music for the moment.”

After relocating to Dallas Texas, Don began to work with locally established female vocalist “siren” Maylee Thomas, working the North Texas Area, Colorado, New Mexico, Florida and Oklahoma markets. During this period Don’s guitar work is heard on releases “Live At the Palace” and “Angels Watching Over Me.” The bands performances include performances with Jimmy Vaughn, Kenny Loggins, Eric Johnson, Kenny Wayne Shepard and Storyville. On occasion the band was the backup ensemble for Bruce Springsteen “Sax Man” Clarence Clemons.

Taking up residence in Atlanta Georgia, another version of his studio “The Soul-O-Room” was built. There he produced a number of artists and bands which had made mention in “Mix” Magazine. Don frequently made visits to Nashville to record and or perform live with some of the worlds best known players.

Don eventually made his way back to the North Texas area where he became the guitarist for International House of Blues Foundation performing a scripted and musically diverse educational program to include the inception of blues in the early 1900’s to the present.  Don also performs solo, in a duo and full ensemble settings, produces, writes songs, composes production music, tracks guitar for virtual projects globally, and is an instructor.

Don was also inducted into the Rochester Music Hall of Fame in 2014 with fellow band members Duke Jupiter.